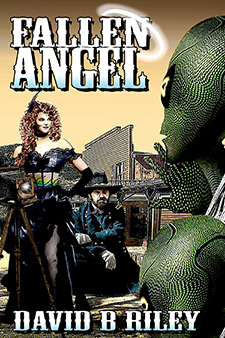 Fallen Angel is the story of Mabel, an angel from Hell, who accompanies General Grant's army during the last days of the Civil War only to discover that Martians are watching the Earth with envious eyes and slowly drawing their plans against us. Not only that, but Mabel has to contend with her evil sister, who wants to have humans for dinner. Although Mabel and Grant get the upper hand before the war ends, the battle of good against evil isn't won so quickly. Several years later, in San Francisco, Mabel just wants to have fun with her friend Miles O'Malley, when she discovers her sister and the Martians have joined forces with a college fraternity and humanity may be on the dinner menu.